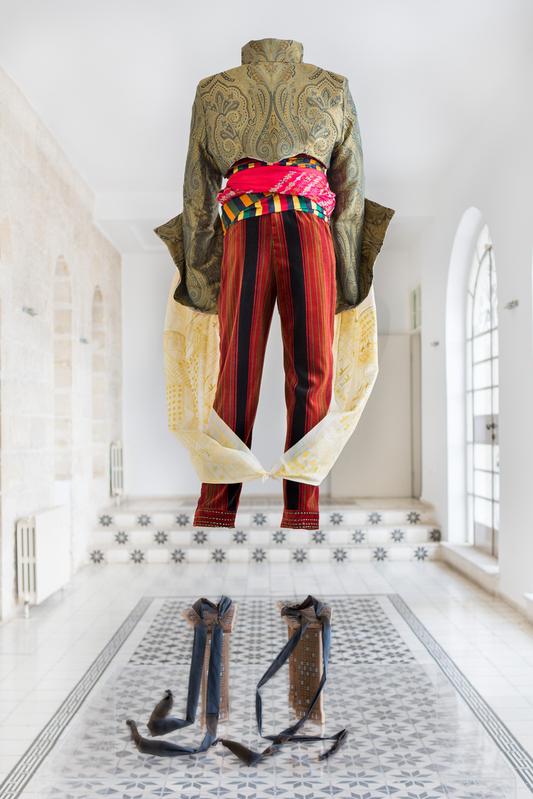 The Ceremonial Vniform is the imaginary male uniform for the imaginary Palestinian State 194, designed and made using traditional rural Palestinian textiles and techniques, especially womenswear. Each article of dress that comprise the uniform was conceived and made to reflect and reference symbolic concepts of statehood, war, sexuality and heritage.

It aims to critique the obsession of the Palestinian political establishment with clichés, symbols, titles, appearances and formalities. The project comments on masculinity, which seems to be at the core of the Palestinian struggle for self-determination and national identity. How the concept of the nation is in itself patriarchal, based on a male-orientated hierarchy, and how  the occupation of Historic Palestine, which is both colonial and nationalist, is gendered and, therefore, by default masculine.

The Ceremonial Vniform concentrates on the masculine framing of the Palestinian male, consistently juxtaposed against the authenticating romantic image of the female who seems to eternally appear in her uniform of traditional rural dress. In particular, the work hopes to expose how patriarchy is reinforced by the conversion of women from their male-derivative roles as sisters, mothers and wives in embroidered rural dress, to male-equals in military fatigues, trousers, hattas etc.  It is as if women, or non-men, cannot create or embody viable alternatives – but need to adopt the patriarchal narrative of power structures – they simply change uniforms.’ With this in mind, the Ceremonial Vniform is a humble and playful attempt to unsettle and challenge this tendency.

The Ceremonial Vniform started as response to the A.M. Qattan Foundation’s Young Artist of the Year Award competition for 2012 (YAYA2012). The proposal, which was submitted in January 2012, was accepted as one of the 10 finalists in the competition.