Silk Thread Martyrs is the name of my first ever collection. It was designed as an imaginary traditional mourning attire from Palestine. The collection is conceptually inspired by the omnipresence of death in occupied Palestine, which has thrown society into a perpetual state of self-censure, mourning and dystopia. As an act of defiance, I thought the collection should actually take the overbearing presence of loss in our lives and solemnly celebrate it. I had hoped to subversively flaunt the last thing that Palestinians still own: our doom.

Structurally and technically, the work draws inspiration from the historic rural dress and fabrics of Palestine and specifically the work of traditional Palestinian embroiderers, many of them displaced and refugees living in Palestine, Lebanon or Jordan, who have maintained and developed the craft by using it as a means of income generation.

To embroider the collection, I worked with embroiderers from theAssociation for the Development of Palestinian Camps in Lebanon (INAASH).  I was inspired by the high quality, fine details and dedication of their work which I first encountered in 2005. Since that initial encounter, I was determined to work with the embroiderers at INAASH.

For this project I worked with : : 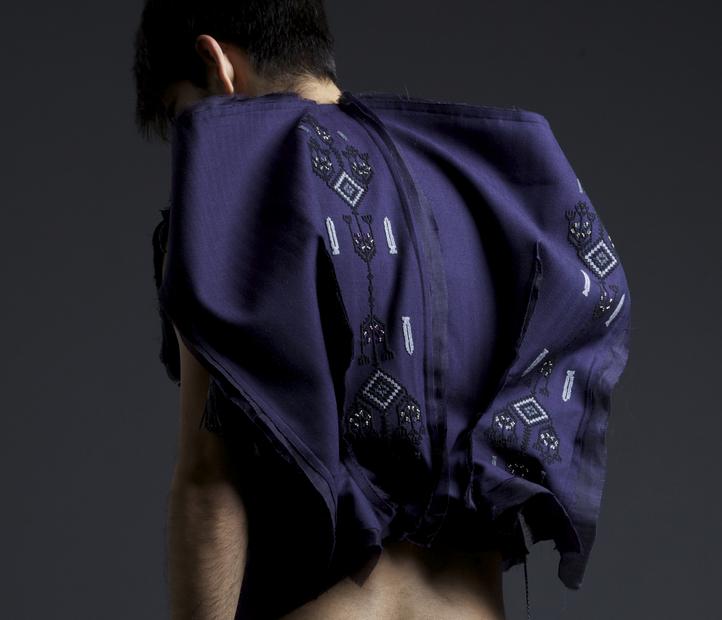 The short film for this project was made as an experiment in fashion film in collaboration with Lebanese filmmaker,Anthony Kmeid who shot and directed it. The idea behind this was to elaborate on the concept of mourning, martyrdom and death through the lens of fashion and Arab Catholicism.

When we made this film, I had just finished my BA studies and Anthony was in his final year at university. Except for the mourners, who were relatives of the assistant director, we were all in our early 20s. After a few months of discussing the idea, we decided to do it. With a week to prepare, we shot the entire film in one day.

the film tells the story of a martyr being prepared for her sainthood. 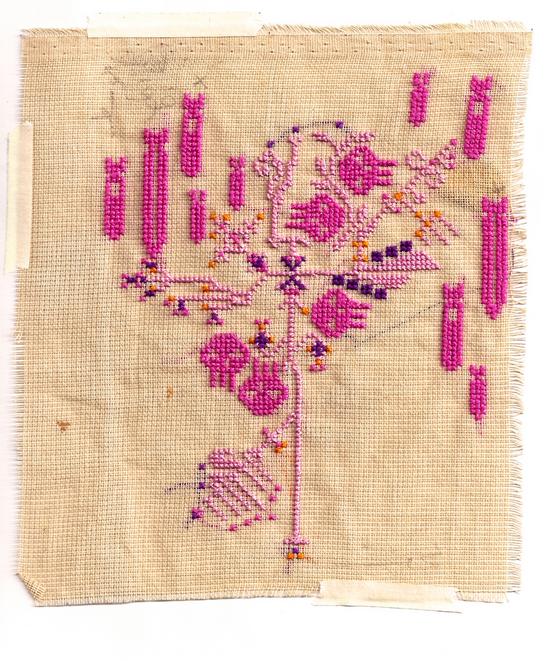 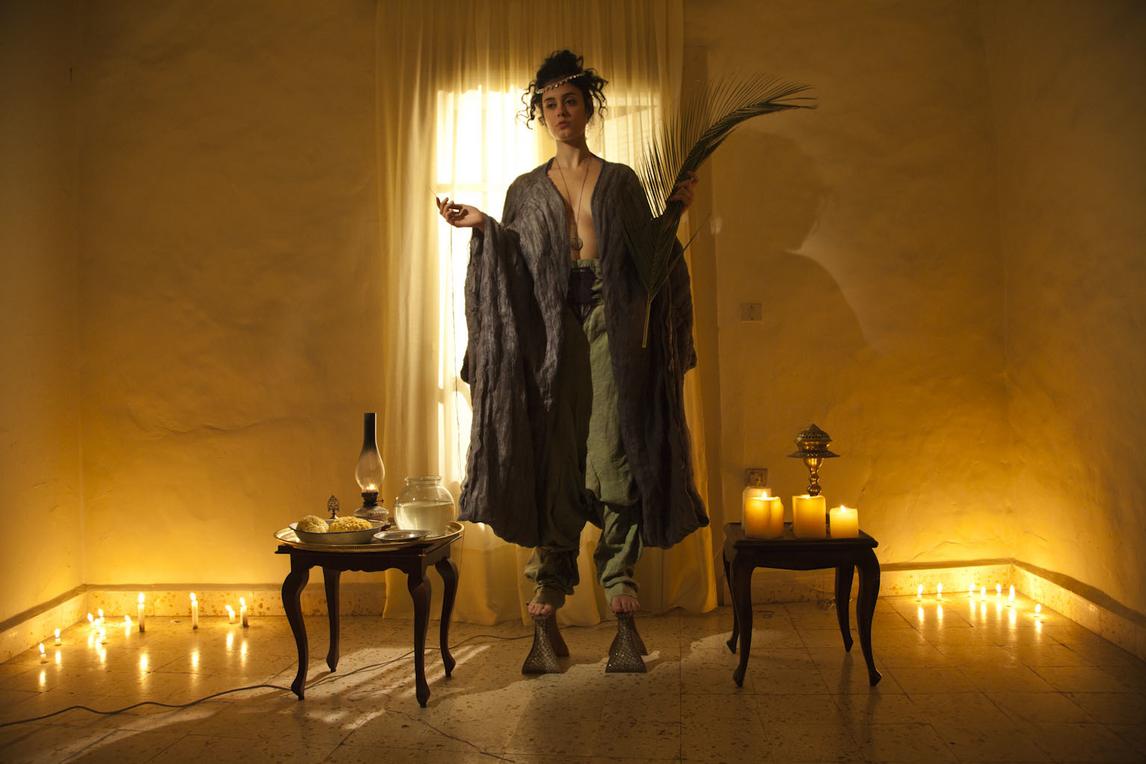 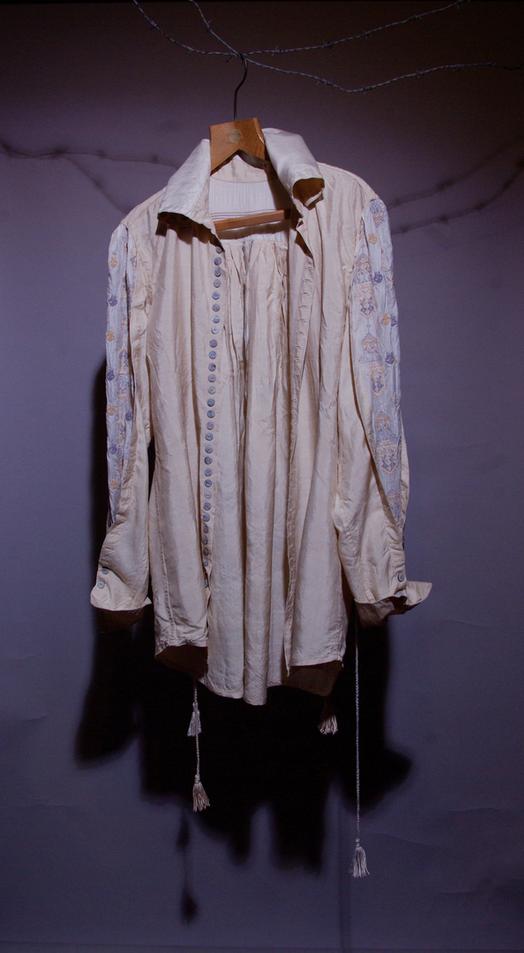 As my first collection, Silk Thread Martyrs was my first attempt at suggesting a new, transformed and re-imagined look that revisits clichés, gender, duty and social constraints in Palestine. I was neither interested in making clothes for rich vapid fashionistas, nor was I  ever interested in ‘reviving’ or ‘modernising’ rural Palestinian dress or embroidery, because I think the approach is pointless. To assume there is a cut off point between the historic and contemporary is a mistake. Embroidery had in fact been modernised, post-modernised, and re-invented by Palestinians both in and outside the context of dress and the body. The disembodiment of embroidery is actually a metaphor for the disembodied and fragmented Palestine and Palestinians. In fact, the very poor aesthetic, often rejected as ugly, or inauthentic, or unmodern is the result of modernity.  This led me to realise that most of these calls for modernisation, were actually calls for commodification and to transform embroidery into luxury.

The idea and concept for Silk Thread Martyrs was developed as part of my final major project for my third year at London College of Fashion. The project was never finished in time for submission and I was deferred, which meant I could not take part in the final college runway show. Thankfully, it was a blessing in disguise.  I  decided to exhibit the collection independently at the Mosaic Rooms Gallery in London on the fringes of fashion week in early 2011. As a result, the British Museumacquired one of the pieces for its permanent collection.

The images in the gallery above were made in collaboration with Lebanese photographer, Tarek Moukaddem. The shoot for Silk Thread Martyrs in 2010 was the first image-making project we worked on that lay the ground for future collaborations under the title of Stvdio El Sham. Tarek and I had met and became friends earlier in Spring 2009 over a pair of trousers that I made and was wearing. He wanted a pair for himself. Back then I was doing an internship at the Association for the Development of Palestinian Camps in Lebanon (INAASH) as part of my Fashion Design BA course at London College of Fashion.

When we shot Silk Thread Martyrs we wanted to give it a distinctly 'pastiche orientalist'  style, without being specific in terms of time, place or origin. This was an anti-fashion project, which set out to challenge, re-imagine, reference and fabricate. This was certainly not, by any means, an ethnography, nor was it an exercise of accurate representation. We wanted to play with this contentious theme because it was an invented and discursive one, albeit ludicrous, just like the moral and ethical constraints and limitations we imposed on ourselves as a society facing colonial domination and death.

Textile: the Journal of Cloth and Culture

CNN - Inside the Middle East