The Maria Theresa Feather Armour, worn here by Botho Neuß (photographs byMalcolm Crowthers) is made with stamped ceramic plates, embroidered silk pin-cushions and actual Maria Theresa silver thalers. The armour which was designed as part of the original uniform draws inspiration from the widespread use of the Austrian silver coin in Palestine. The thaler, or dollar, which is still being minted today, was traditionally known as abu risheh, or father of feathers, due to the double-headed eagle of the Austro-Hungarian imperial coat of arms, which appears on one side of the coin. The thaler was one of the most commonly used silver coin/bullion among rural communities in historic Palestine and the region. Its integration into dress (headdress and jewellery) was a reflection of wealth and power due to its distinct cultural value, size, weight and high silver content, as well as its unmistakable features which made it both conspicuous and difficult to forge or imitate. [ see Clara Semple's A Silver Legend: the Story of the Maria Theresa Thaler, 2007 ] 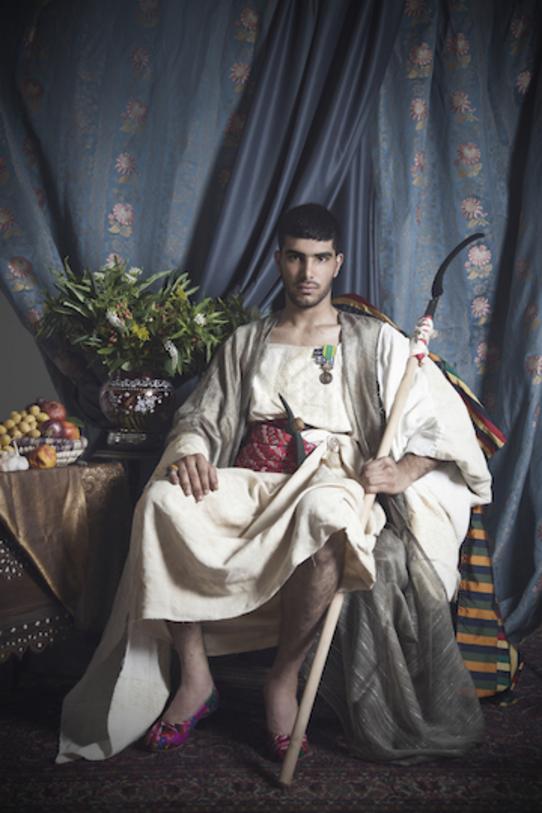 To make the talismans for this projects, a general line structure of the design/pattern was drawn out by hand and filled with what resembles interlacing sacred geometric shapes and lattice designs. The text, symbols, numbers and logos were then collaged in, such that the blueprint for each talisman is a sort of paper mosaic. To make each product the original designs/collages were scanned and digitised and finally rendered into wood (PLO clogs - left), silk screen, or offset prints depending on each design.

As I was developing the undergarment/shirt for the uniform, I came across the talismanic shirts often worn by knights and warriors under their armour for protection in battle. I was also working at Birzeit University Museum on the exhibition, Musevm - Seat of the Mvse, which gave me access to the Tawfik Canaan amulet and talisman collection there. These inspired me to create a talismanic shirt as part of the uniform.

In many formal talismans, sacred texts and prayers appear alongside numerology, magical symbols and geometry. This is usually done to protect from evil or attract whatever the wearer, bearer, or owner desires. Some talismans were produced for personal use, whilst others were made to reproduce en masse for general consumption. In some paper talismans, the evil itself was specified and portrayed through text and imagery, like the commercially produced Seven Solomonic Testaments.

Since the work was intended as a critique and satire of the Palestinian political establishment, I decided to replace these sacred texts and symbols with political symbols of the nation, historic dates, UN resolution numbers, logos, Israeli assault weapons, and clichés from Yasser Arafat’s declaration of state speech in 1988 and his United Nations address to the General Assembly in 1974, as well as phrases from Mahmoud Abbas’ United Nations speech in 2011 and his official address in March 2013 on the occasion of International Women’s day (the Great Seal of Intersectionality - above). 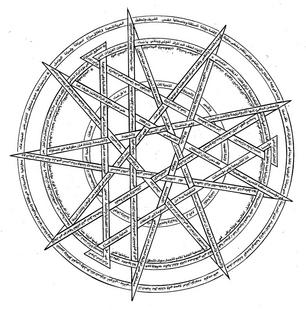 the Black Magick Talisman folded, stamped and sealed in the P.A.'s I.D. wallet 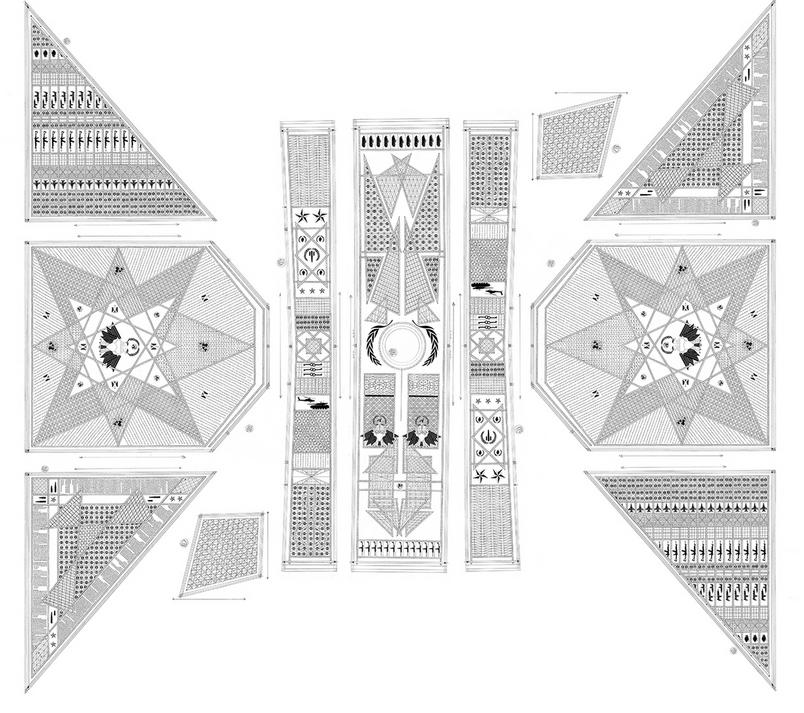 the Black Magick Talisman | [ back ] 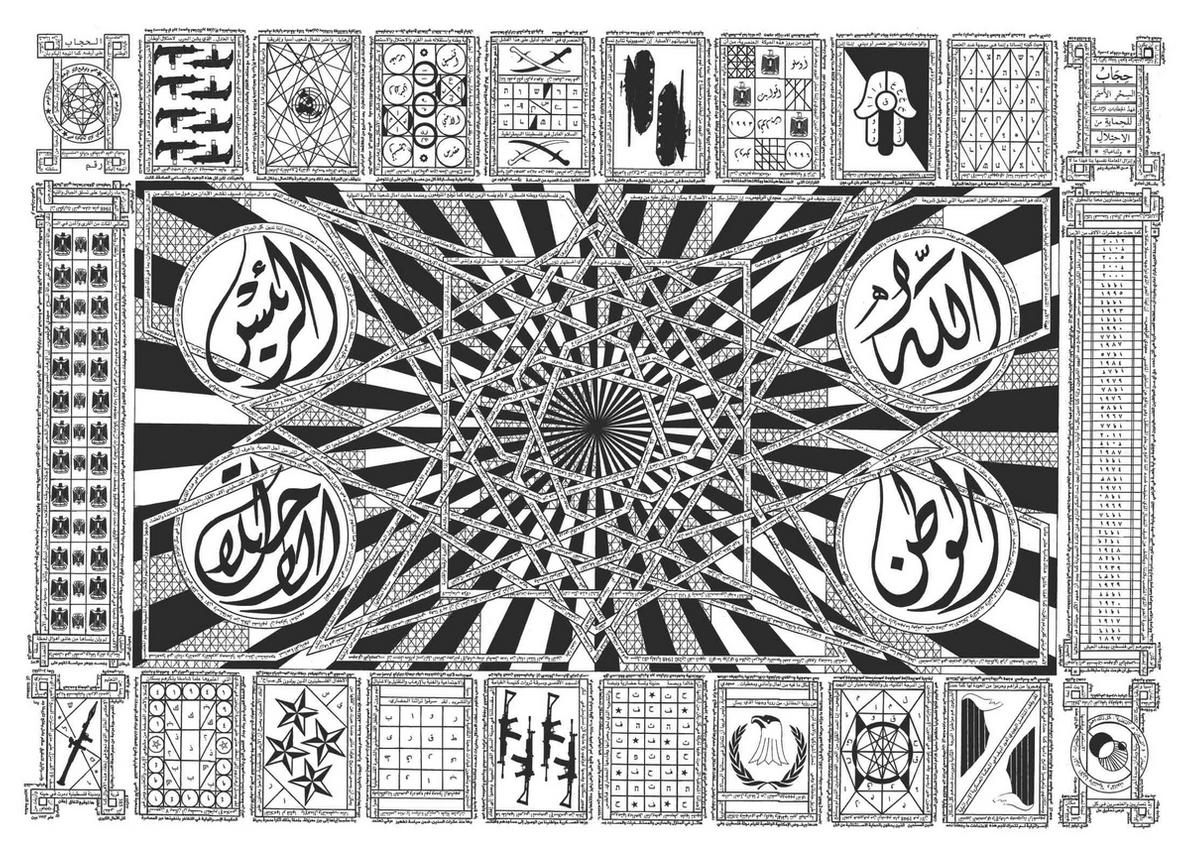 detail from photo in collaboration with Tarek Moukaddem | 2013 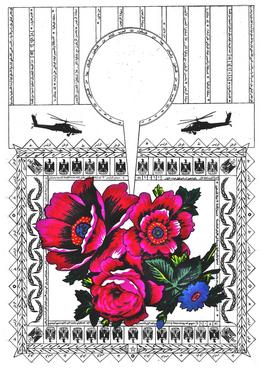 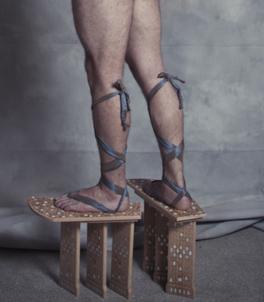 the Black Magick Talisman : : The Presidential Testaments for the Protection Against the Occupation and It's Manifold Manifestations

the Great Seal of Intersectionality | 2013

photos of clogs for gif by ©Malcolm Crowthers | 2013

The Official Portrait of Abu Zuhair (right) and Abu Saleh (left), as they wished to be known, created in collaboration with Lebanese photographer Tarek Moukaddem on August 10th 2013, is an attempt at challenging and ridiculing images of power, symbols of the nation, nostalgia, and ideas of gendered-dominance.

The deliberate reference to affected European portraiture is a critique of the Palestinian political establishment and its obsession with imitating globalist and nationalist modes of government and nation building. The sitters, Abu Zuhair and Abu Saleh, who give their names to the portraits, are Syrian migrant workers who work and live in Lebanon. Their total lack of previous modelling experience is central to the aesthetic and ethos of the project. Abu Zuhair and Abu Saleh are well aware of the performative nature of their role, as opposed to the Palestinian career politician/activist, who is so deeply conceited that they cannot see how they are just a mediocre iteration of the neo-liberal globalised politician; a stenographer of power and complacency.

The pink heels, unlike the other items of dress in the portraits, are provocatively and unabashedly feminine and therefore directly anchor the images in the original concept of the project. It is worth noting that this is not done to personally emasculate the sitters by dressing them in what might be generally deemed as ‘womenswear’ but to highlight what the other fabricated garments do not state: masculinity’s obsession with the body and how to control it as the case with all social and political practices based on patriarchy. 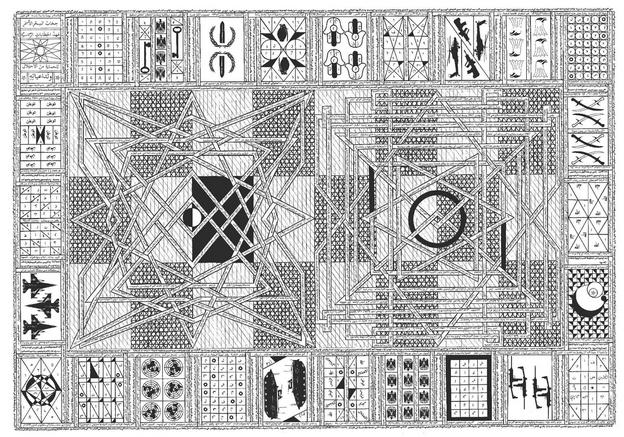 The Ceremonial Vniform is the imaginary and satirical male regalia for the imaginary Palestinian State 194. It is designed and made using traditional Palestinian crafts and rural textile techniques, especially womenswear. Each article of dress and accessory that comprise the uniform was conceived and made to reflect and reference symbolic concepts of, and anxieties around, statehood, identity, war, sexuality, authenticity and heritage.

This project aims to critique the obsession of the Palestinian political establishment with the image of power: clichés, symbols, titles, appearances and formalities. The project comments on insecure masculinity, which seems to be at the core of the Palestinian struggle for self-determination and national identity. How the concept of the nation is in itself patriarchal, based on a male-orientated hierarchy, and how the occupation of historic Palestine, which is both colonial and nationalist, is gendered and, therefore, by default masculine.

Conceptually, the Ceremonial Vniform concentrates on the masculine framing of the Palestinian male, consistently juxtaposed against the authenticating romantic image of the female who seems to eternally appear in her uniform of traditional rural dress. In particular, the work hopes to expose how patriarchy has been reinforced by the conversion of women from their male-derivative roles as sisters, mothers and wives in embroidered rural dress, to 'male-equals' in military fatigues, trousers, hattas (keffiyeh), etc...

It is as if women, or non-men, cannot create or embody viable alternatives – but need to adopt the patriarchal narrative of power structures – they simply change uniforms. With this in mind, the Ceremonial Vniform is a humble and playful attempt to unsettle and challenge this tendency.

Technically, the project relies greatly on the use of local craft traditions and techniques to create the design. My goal was to use these historic local practices, their implications and meanings to lend context and continuity to the final work. To do this I researched and worked with different techniques and specialists.

These individuals, or groups are credited below : :

The Ceremonial Vniform started as response to the A.M. Qattan Foundation’s Young Artist of the Year Award competition for 2012 (YAYA2012). 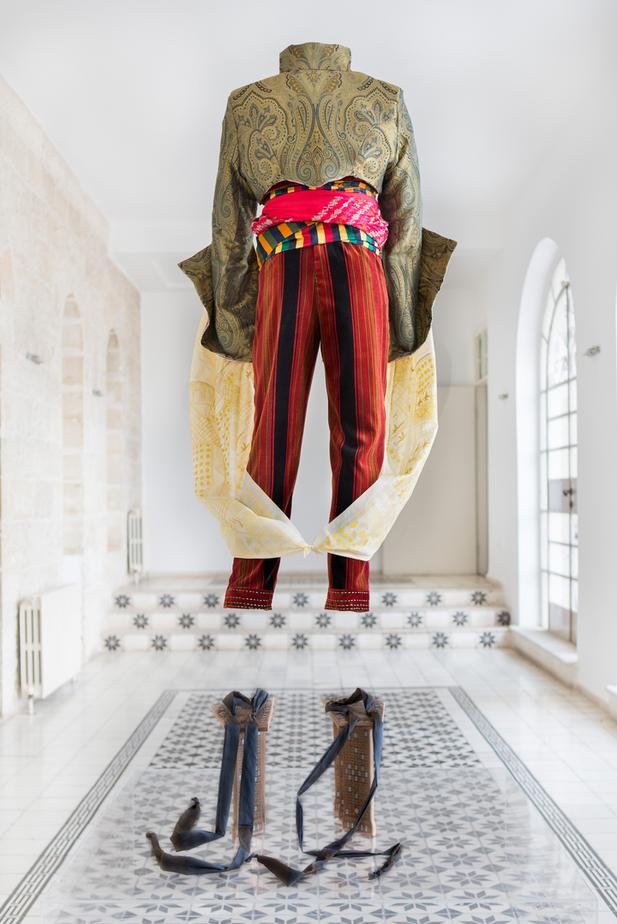 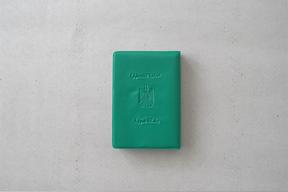 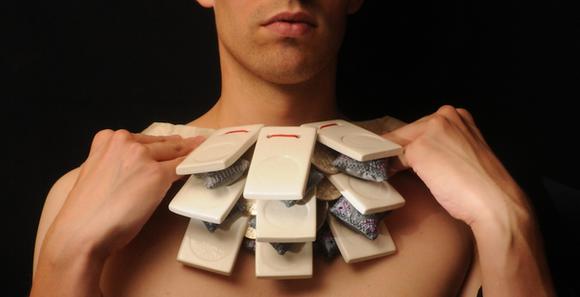 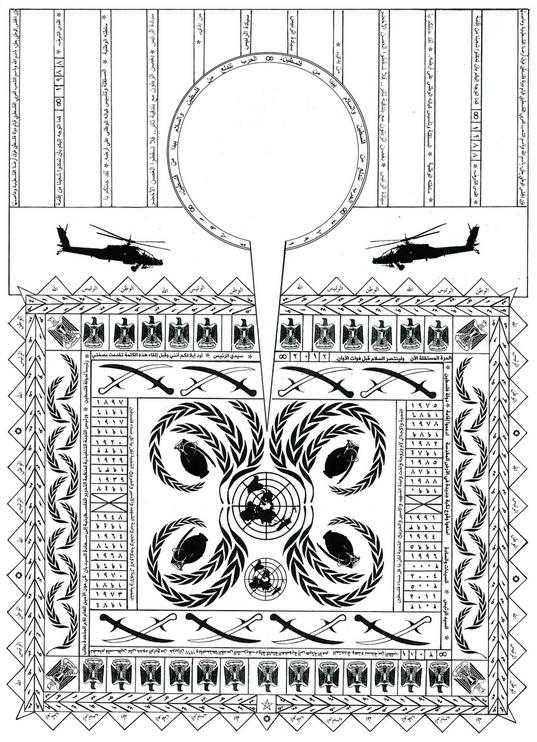 each talisman has a unique serial number | 2015 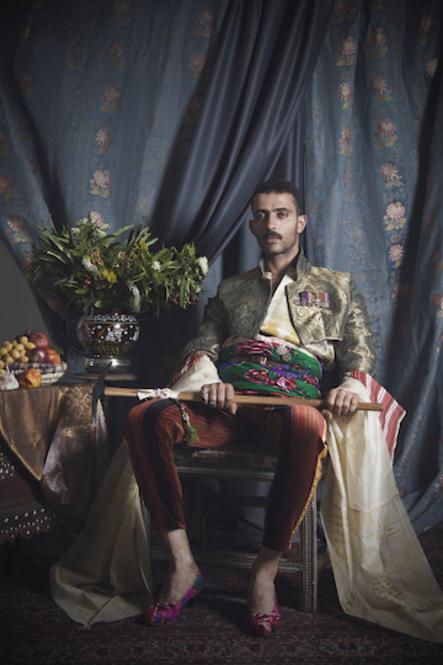 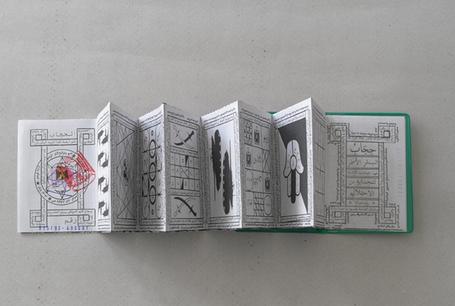 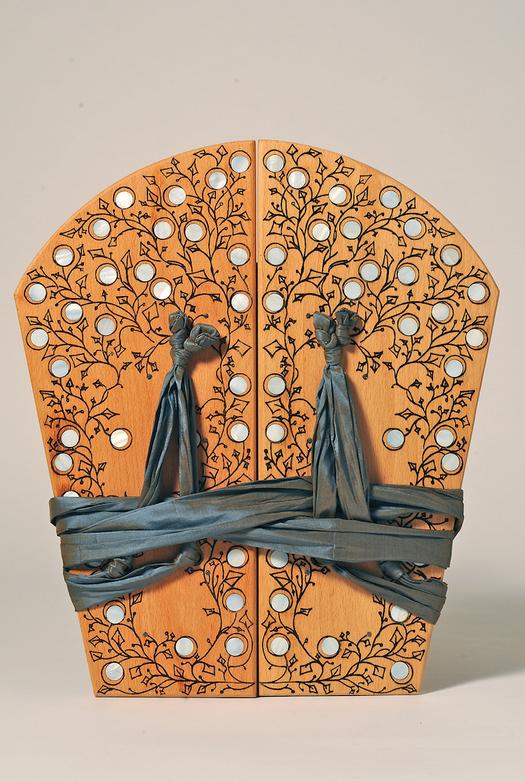 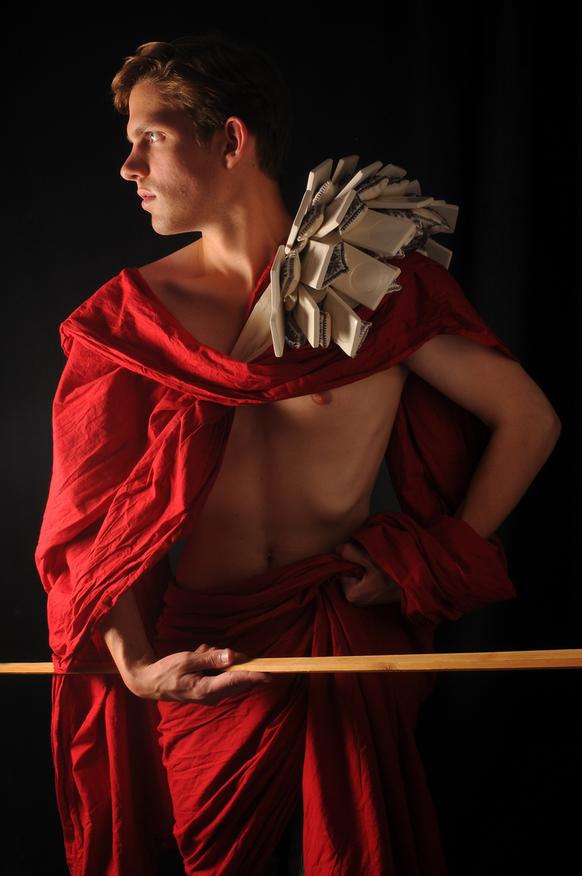 the New Left Project via Truthout